If you walk down the main road of Abastumani you feel like strolling through a ghost town. This old spa town in the South-east of Georgia, close to the Turkish border, has lost everything from it’s former splendour. Pigs and horsed are sharing the road with the few cars, which pass through the thickly wooded valley. The wooden houses, which are decorated with nice woodcarvings are abandoned and rotten. Although some morbid attraction still remains. Some buildings can still be entered, but in some others the floor is covered by water or already fell in. Nevertheless it is obvious how nice these buildings, dorms and assembly rooms once must have been. Many of them are built without any nails, but only by dovetailing, what is typical for some parts of Georgia.

One of the former dormitories

Next to the so-called German House, which possesses colourful windows and was designed by a German architect, sits Tina Natelashvili on a bench. “In former times the people came from the whole Soviet Union to cure their diseases. In Abastumani there is the best air and of course we have the medicinal springs”, tells the 79-years old lady. She worked for 40 years in the administration of this spa town and has three children, eight grandchildren and seven grand-grandchildren. She shows old photographies from former times, when Abastumani was a flourishing place. “There were about 2000 guest each season and we had nine sanatoriums running, where a lot of doctors and nursed were working”, says Natelashvili. Today only two baths are still running, where you can soak 2 hours for 5 Lari.

Tina Natelashvili in her living room 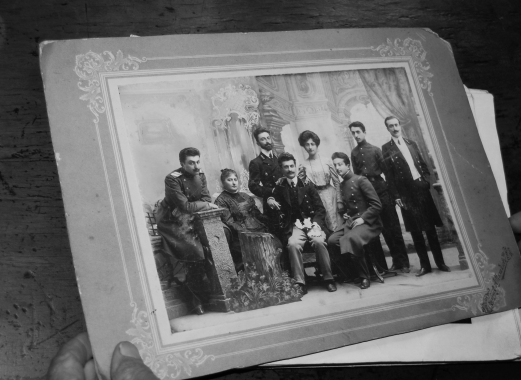 Group picture of the medical staff

The city evolved already in the 19th century as a part of the Russian Empire to an important spa town. Giorgi Romanov, third son of the emperor of the Russian Empire Alexander Romanov III, who suffered from tuberculosis, spent a large part of his life here. He owned three houses and as he was interested in stars – beginning from his childhood – he spent his private money in 1892 to build up the building of today’s observatory located on the top of the mountain Kanobili next to Abastumani. Due to the location in a huge wooded mountain area, this spot is really appropriate to take a look to the nightly sky. In 1899 Romanov died there, where he spent so much time of his short life, with only 28 years due to a bike or motorcycle accident. The real foundation of the observatory was in 1932. Professor Evgeny Kharadze was 60 years the person in charge of the observatory, which was the first one in the Soviet Union. Today the observatory is a research centre of the Ilia State University Tbilisi. The telescope origins from the company Carl Zeiss Jena, based in the Eastern part of Germany in the at that time German Democratic Republic (GDR) and is functioning until today. “When Juri Gagarin went to space, the whole world came to Abastumani to take a look through the telescope”, remembers Natelashvili.

The „German House“ was designed by a German architect

Crossing the street in Abastumani

Since then a lot has changed. On a hill in the centre of Abastumani, where a statue of Stalin was raised, stands now a statue of the Georgian writer Shota Rustaveli. Also other signs of Soviet times are vanished: the pedestal, from where Lenin had an overview over the park, is empty today. Still it is easy to imagine how the patients strolled up and down in the at that time beautiful park or sat down in the pavilions to chat or drink tea.

View of the park and the pavillon

In the beginning of the 1990ies Abastumani lost its importance, the spa guest failed to appear and the once impressing buildings decayed. Besides the high unemployment rate, another problem is the destroyed canalisation and the resulting bad quality of the tap water. But maybe something could change soon. Georgian millionaire Lasha Papashvili already bought several houses and announced to revive the old spa town again. Until 2018 a hotel for about 140 wealthy guests shall be erected and others are about to come. Maybe this could be a perspective for the citizens of the 3600 inhabitants-town and a possibility to revive the spirit of the 19th century spa town Abastumani?